NMCOA will not meet during the months of June, July and August. Enjoy the summer! We will resume our meeting schedule on September 16, 2022.

As a reminder, this December we will hold election of officers on the Board of Directors. The current Secretary, Jerry Bleau, is resigning from the Board, effective after the December 2022 meeting. If reelected Jerry would have stepped up to the Treasurer position next year. In addition, Martie Van Berlo has decided to step down from his participation with the Board of Directors after 22 years of Board involvement. His final meeting as a Board member will be December 2022. Current Director at Large, Tom Doss, if reelected will step into the Education Director position next year. With all of this, we do have openings for any of the Board positions, with vacancies for Director at Large, Secretary and Treasurer. The Director at Large position is the starting position for Board members. The Board has discussed various options to take on the Board responsibilities should there not be enough persons stepping up, but that should be a last resort. If you have an interest in serving on the Board please reach out to us at nmcoa75@gmail.com.

At the December NMCOA meeting, Simpson Strong Tie Representative Jerry Tuggle was recognized for his many years of service to the code officials throughout the State of Michigan. Congratulations to Jerry on his pending retirement. We wish him well. 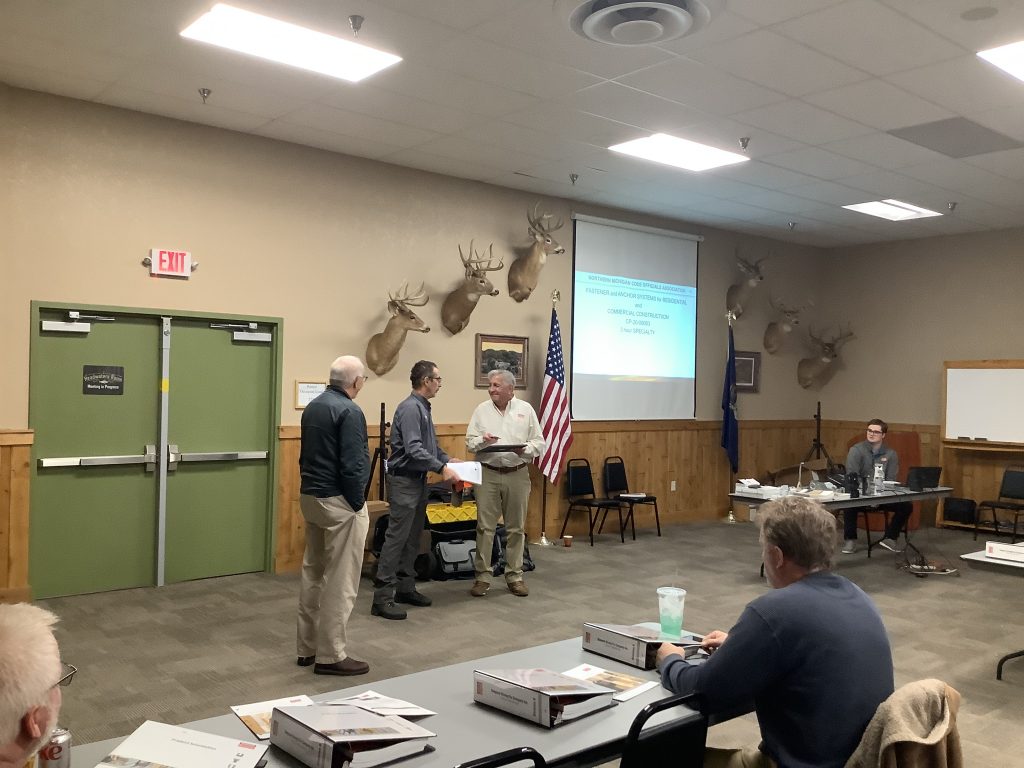 Program Attendee Lists:  Attendee Lists for the webinars recently presented can be found by clicking the Certificate of Attendance tab at the top of the home page.

MADCAD Online Referenced Standards: As discussed over the past few months, NMCOA has lost some previous participating jurisdictions in the NMCOA MADCAD subscription for 2022. The Board will continue to look at options for this program and how NMCOA can continue to provide this valuable resource of code referenced standards to its members as a reasonable cost. There is still time to subscribe. Contact us at nmcoa75@gmail.com for information.

For those not familiar with the benefits of MADCAD, the referenced standards, as noted in the codes, are actually considered part of the code. You can find this reference in Section R102.4 of the 2015 MRC, and Section 101.4 of the 2015 MBC. Similar references can be found in the electrical rules, the mechanical and the plumbing codes. This means that the code books only contain part of the requirements of the code. Without access to the referenced standards, how does an inspector perform their duties as code officials?

The cost to have the referenced standards as a physical library are far more costly than many jurisdictions can afford. The MADCAD online library is a low cost way of accessing many of the standards referenced in the codes. That is the reason that NMCOA has worked with MADCAD to provide a subscription based access to its members since 2016. If your jurisdiction is not currently subscribed to MADCAD and you would like further information, please email your request to nmcoa75@gmail.com .  NMCOA will be happy to get your jurisdiction enrolled into the subscription program.

Please add the NMCOA email address to your mailbox as future emails may be sent through this address. nmcoa75@gmail.com

2021 NMCOA Membership information and application can be found under the membership tab on this website. The application is interactive, meaning that the form can be filled out on your computer, then printed and submitted by mail as per the instructions. NMCOA is not able to accept credit cards at this time.

The NMCOA Board of Directors welcomes Tom Doss, Emmet County Building Inspector as the Director at Large for 2021-2022.

Updated Board information can be found under the Contact Us tab.